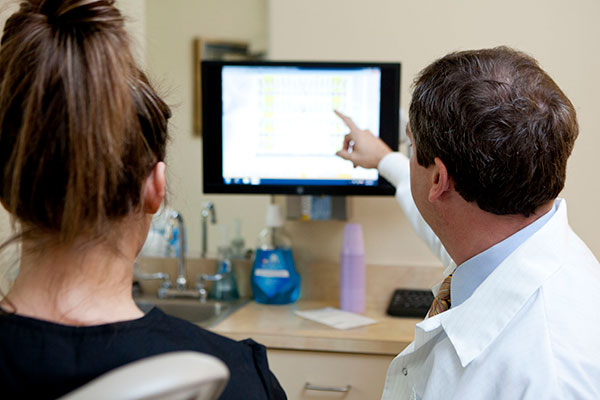 Many adults have periodontal disease or gingivitis - ranging from slight inflammation of the gums to seriously damaged gums and teeth, as well as bone loss. If left untreated, gum disease is the leading cause of tooth loss for dental patients. Persistent bad breath, loose teeth, inflamed gums, sensitive gums, or gums that bleed easily are warning signs that you may have periodontal disease.

Gum disease can be treated easily if identified in early stages because it can be caused by excessive plaque buildup, smoking, changes in metabolism or hormone levels, or even medical conditions (such as diabetes or kidney conditions). Unfortunately, when plaque is left on the teeth, it hardens into tartar that only a professional cleaning will remove. If plaque and tartar are not removed, they begin spreading below the gum line, which causes the bone to pull away from the teeth. In addition, bacteria can thrive in the space created between the gums and teeth, causing bad breath, painful or sensitive gums, loose teeth, or even tooth and bone loss.

You Can Slow or Stop the Progression of Gum Disease

Along with following a rigorous dental health program on your own, getting professional dental care can slow or stop the progression of gum disease, periodontal disease, or gingivitis. We'll do everything we can to help you maintain or restore your gum's health, reduce gum pain and sensitivity, and avoid tooth loss if possible. And if your gum disease is advanced, we may refer you to a periodontist who specializes in gum care and treatment.

Some People are More Likely to Get Gum Disease

If one of your close blood relatives has periodontal disease, it may mean you're more susceptible to gum disease, even if you are currently experiencing no symptoms of gum inflammation. So be sure to tell Dr. Welch at your next dental checkup if someone in your family has gum disease. We'll monitor you closely, possibly recommending more frequent dental checkups, teeth cleanings, and other preventative dental care to help you avoid gum disease.

BACK TO GENERAL DENTISTRY SERVICES

BACK TO MAIN SERVICES 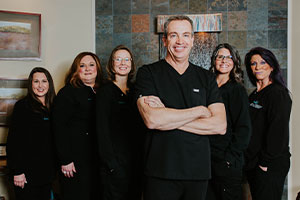 Our patients often ask questions on various topics, and we have listed some of the most common questions for your interest. If you don't see the information you're looking for, give us a call at (336) 288-4499 so our team can help you get your questions answered.

Gum disease, also known as periodontal disease, is a bacterial tooth infection, and it's a common concern for adults. It can be caused by plaque buildup, smoking, changes in metabolism or hormone levels, or certain medical conditions like diabetes. While teenagers may develop gingivitis, a mild form of gum disease, most people don't show any signs of serious gum disease—periodontitis—until they are in their 30s or 40s. Men are more likely to develop it than women. Luckily, treatment is easy if it's identified in its early stages, so gum disease is curable.

When plaque is allowed to develop and remain on teeth, it hardens into tartar, which only a professional cleaning can remove. If plaque and tartar are not removed, they begin spreading below the gum line, which pulls away from the teeth. Bacteria thrive in the space that's created between the gums and teeth, causing gum disease. In general, there are two stages of gum disease:

Some people do have a genetic tendency to be susceptible to gum disease, hormonal changes such as those during pregnancy, and diabetes and other illnesses can make the mouth more susceptible to infection. While we don't know exactly what causes periodontal disease, we do know that there are some serious risk factors, including inadequate dental hygiene and smoking tobacco products.

Smokers and smokeless tobacco users are six times more likely than non-smokers to have serious gum disease. Why? Tobacco users have more tartar on their teeth and deeper pockets between teeth and gums, decreased blood flow in the gums that affects how gums heal, and mouths that are more susceptible to infection by aggressive bacteria. Bottom line: Smoking increases your risk of gum disease, and if you have gum disease already, smoking makes it worse.

Diabetics are more likely to have gum disease than non-diabetics, primarily because diabetics are more susceptible to infections in general. High blood sugar results in high levels of sugar in body tissue, making the tissue a natural host for bacteria that cause infection. Interestingly, research has shown that gum disease can make it harder for diabetics to control their blood sugar—severe gum disease actually may increase blood sugar—so the relationship between diabetes and periodontal disease appears to go both ways.

If you are a diabetic, dental checkups should be an essential part of your ongoing healthcare plan. Keeping your teeth and gums in their best possible health will reduce your possibility of experiencing complications from the infections that cause gum disease.

People with gum disease are nearly twice as likely to have coronary artery disease (heart disease) than those who have healthy gums.* Studies have suggested that common oral health problems like periodontal disease can be as clearly correlated with heart disease as cholesterol levels. Keep in mind that no one has proven that gum disease causes heart disease; the two conditions have simply been shown to co-exist frequently.

The "why" of the gum disease/heart disease relationship is still under intense scientific research. We do know that oral bacteria can find their way to the bloodstream through the gums. Some researchers believe that these oral bacteria cause blood cells they come in contact with to swell, narrowing an artery in the heart. Research is still ongoing about the connection between oral health and heart health, but most medical professionals believe that a patient who suffers from severe periodontal disease may also be likely to have cardiovascular problems.

If you are worried about heart disease, treating your teeth and gums well shouldn't be the only step you take toward cardiovascular health. Whether or not periodontal disease is a potential risk factor in heart disease, good oral hygiene is simply a good idea!

Gingivitis, gum disease, and periodontal disease are all terms used to describe forms of bacterial growth in your mouth. Typically, dentists refer to gingivitis as the first stage of bacterial infection in your gums, while gum disease—or periodontitis—is the more advanced stage of the condition. Bacteria are normally in our bodies, and most cause no harm. However, in some individuals, the bad bacteria in the plaque that forms on our teeth thrive in the warm, moist mouth environment, causing significant irritation of the gums. Gingivitis is an inflammation of the gums, while in periodontitis, the bacteria actually begin to break down the bone and connective tissues of your teeth and gums.

What are the signs and symptoms of gingivitis?

Gingivitis is inflammation of gums. The main symptoms of gingivitis are red, swollen gums, and bleeding when tooth brushing. This mild form of gum disease can be reversed through daily brushing and flossing, along with regular professional dental care.

What are the signs and symptoms of periodontal disease?

The symptoms of periodontitis/gum disease include: red, swollen gums; bleeding during and after brushing; frequent bad breath; receding gums; and loose, shifting teeth. Periodontitis is disease of the gums, a more serious concern because the gums actually pull away from the teeth, leaving spaces ("pockets") between teeth and gums where bacteria can thrive.

If you have any questions, or would like to make an appointment, call our professional dental team at (336) 288-4499.